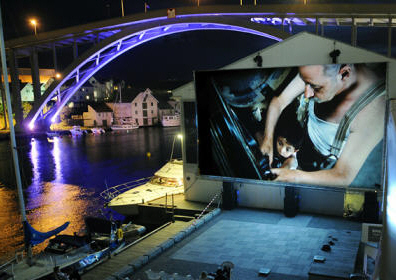 Full digital roll-out will commence in Norwegian cinemas during the second half of 2009.Digitalisation will encompass all 440 screens in 220 locations throughout the country, with an estimated price tag of NOK 400 million (€ 45 mill). The technical implementation phase is estimated to be completed by 2011, while the full digitalisation programme has a six-to-eight-year span. The process of going digital will be coordinated and partly funded by the cinema umbrella organisation Film & Kino.

Norway’s cinema system is unique in Europe, originating in 1913, when municipalities started taking over cinema operations across the country. Since 1925 the municipally owned and operated theatres have held a dominant market share, standing today at 72,6 per cent (admissions) and 81,1 per cent (box-office). As a consequence of this system, cinemas operate as individual enterprises, being individually programmed, and exhibition in Norway is thus not based on the classical organisational paradigm of cinema circuits/chains.

Since 1970 municipally and privately owned cinema have collaborated closely on developing the exhibition sector as a whole, co-ordinating these activities through the organisation which today is known as Film & Kino  (http://www.filmweb.no/filmogkino/diverse/article54083.ece).

Central to these efforts have been the Cinema Fund. The Fund was set up in 1970 as a mutual fund, financed by a voluntary 2,5% levy on cinema ticket sales to finance projects of common interest and benefit to the exhibition sector: From support for film festivals and cinema literacy programmes, to ambulatory cinema services and P&A support in various forms, to training courses for cinema staff and technical and other consultancies.

The Cinema Fund became enshrined in the Law on film and videogrammes (1987), which made the voluntary levy obligatory on all cinema ticket sales, as well as on all video/DVD sale and rental transactions. The levy (2,5% of ticket sales; NOK 3,50 per video/DVD transaction) currently brings some €7,5-8 million into the Fund annually.

The Regulations (http://www.lovdata.no/for/sf/kk/xk-19991220-1515.html) given under the 1987 law provide general aims for the use of the Fund’s resources, while establishing legal base for Film & Kino to determine concrete operations, under the superintendence of the Ministry for Culture. The Regulations furthermore stipulate that all stakeholders (i.e. representatives of contributors to the fund) have the right to be represented on the Board of Film & Kino.

A main aim of Film & Kino in devising a digital roll-out scheme has been to bring all cinemas on board from day one. Simulations show that if the country’s major 50 cinema enterprises were digitalised, 90% of the market would be covered. In line with its mutuality remit Film & Kino has expressly aimed at devising a scheme that would not “leave behind” any cinema interested in going digital.

These preliminary and preparatory steps have lead to a model for digital roll-out that comprises:

? Agreements with US majors on the supply of digital prints, technical standards and business model.

? A technical minimum package, with optional add-ons, to be offered to cinemas by system integrators, chosen by public tender.

? A financing model based on leveraging a NOK 400 million (€ 45 mill) roll-out package, cashflowed by a financial institution to be chosen by public tender.

Film & Kino estimate that full digital roll-out will be completed within two years from deployment date, while the financial transactions will have a 6-to-8-year completion span.

In order to secure sufficient digital screening prints for the digital cinemas Film & Kino has negotiated with six US majors (Warner Bros., Paramount, Universal, Disney, Fox and Sony). A minimum of three majors agreeing to participate in the scheme has been considered necessary. As of mid-2009 five US majors have signed contracts with Film & Kino; negotiations with Sony are still under way.

? Guarantees for the supply of digital screening prints by producers.

? Producers’ (and their distribution subsidiaries’) participation in the cost of digital roll-out by way of VPFs.

Film & Kino has earmarked NOK 100 million (€ 11,1 mill) from the Cinema Fund to leverage a NOK 400 million project investment package. The administration of this credit line will be put on public tender to financial institutions throughout the EU and EEA countries. The successful contender will be expected to cash?flow the roll?out, with collateral provided in part by the Cinema Fund allocation, in part by cinema owners.

Recoupment is based on a model where producers and distributors provide 40% by way of VPFs, and the individual cinemas, along with the Cinema Fund digitalisation allocation, will contribute 60%. Recoupment will run until costs of the programme have been covered according to the 40/60 model, or for a maximum of eight years. Current estimates indicate that full recoupment may be achieved within six years from deployment.

Cinemas will receive offers of a basic digital projection package, to be provided by system integrators, comprising:

– A projector of DCI standard, 2K or 4K, depending on the cost at time of deployment

– A screening server, a library server, and an Alternative Content1 processor

A package of optional extras, like up-grade from 2K to 4K (if not included in initial package), 3D capability, and additional server capacity, will be provided.

Cinemas are expected to have digital sound systems already installed, as well as a projection booth of sufficient size and with necessary air conditioning. The technical package will not include electricity supply or broadband connection, nor staff training.

Cinemas may chose between three different models for paying back the digitalisation cost.

– As a loan, over six years.
– By payment in instalments.
– As a direct cash investment.

In the case of credit being engaged, interest and rates will be fixed through Film & Kino’s general terms with the successful financial institution:

Cinemas have for nearly 40 years contributed to the Cinema Fund. The Film & Kino Annual Meeting (the organisation’s highest authority) has therefore stipulated that its NOK 100 mill Cinema Fund allocation will subsidise the digitalisation programme. Part of the money will initially be used as collateral for the credit line put up by the financial institution; as reimbursements mount up, the collateralised amount will be used to reduce the cinema owners’ 60% participation in the digitalisation scheme. The remainder of the Cinema Fund allocation will be a direct cash contribution to reduce the cinema owners’ credit liabilities.

Film producers and distributors will contribute to the digitalisation scheme by paying Virtual Print Fees, amounting eventually to 40% of the total roll-out costs. After reimbursement by way of VPFs has reached this level, the VPF arrangement will be suspended. The VPF already agreed by the Hollywood studios will be charged on the basis of a fixed, flat fee per engagement. The size/amount of the VPF has not been finally established, but it is understood to be applicable to all contracting studios, thus eliminating the danger of over? (or under?)bidding. The VPFs in the Norwegian model are furthermore understood to be modest in comparison with levels in other markets, thus reducing possible producer/distributor reluctance to release or re-release individual titles.

Non-US-majors producers and independent (local) distributors will be invited to sign up to the scheme on similar contract conditions.

It is understood that the European Surveillance Authority, the EFTA watch-dog body, has not raised objections to the digitalisation programme. The subsequent decision by the Film & Kino Annual Meeting in mid-June 2009 to go ahead with full roll-out thus paves the way for cross-country digital projection commencing this autumn and being fully introduced by the end of 2011.