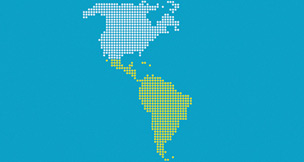 A number of countries now report that their screens are 100% digital (e.g., Norway and the Netherlands), and in some major markets that percentage is up to near 80% (for example, the U.S., U.K., France and Japan). Nevertheless, in Latin America the numbers for the digital rollout are poor and the speed of the process is slow: Penetration is currently at 33% (23% if we don’t include the three countries with the highest rate of screen digitization —Mexico, Colombia, and Ecuador). One year ago, the percentage in Latin America was 22% (20% excluding Mexico and Colombia).

Many factors can help explain this situation: small markets (with no commercial venues attractive to the multinational companies, except in the Mexican and Brazilian markets); no significative presence in the region for virtual print fees, and the lack of development policies (except in Brazil).

In effect, foreign exhibitors with operations in Latin America are privately negotiating VPFs for their own theatres with the majors. But national exhibitors (big and small) haven’t reach any agreements; only the very big circuits, like Cinépolis, Cinemex and Cine Colombia, have power enough to negotiate with the majors.

Meanwhile, film producers in some Latin American countries complain that some big exhibitors (for example, Cinépolis and Cine Colombia) are charging a compulsory VPF for national releases (most of them produced and released with a lot of effort without much money).

Some multinational companies are looking to offer VPF agreements and build a stronger presence in Latin America, like Sony (whose 4K projectors lack the same penetration of other regions), Christie, Arts Alliance Media, Cinedigm and GDC.

In contrast, Brazil is the only Latin American country whose national exhibitors have create a consortium to have more power to negotiate VPFs with the majors (like similar consortiums formed in U.S., U.K., the Netherlands and Germany). Brazil is not only providing financial support for the digital rollout, but also reduces import taxes for digital projectors. Those high taxes continue to be a factor in the rest of Latin America (increasing the cost of digitizing a screen to a final price between US$150,000 and $200,000).

Argentina had announced state support of the digital rollout in the middle of 2011, but nothing has happened yet. Meanwhile, the Colombian Dirección de Cinematografía (national cinema agency) is working on an online platform to stream Colombian and Latin American films, a pioneer project in the region that won financial support from the prestigious Banco Interamericano de Desarrollo (BID). Moreover, Dirección de Cinematografía organized in late 2011 the first Latin American meeting of civil servants, businessmen and researchers dedicated to accelerating the Colombian and Latin American digital rollout. Imcine, the Mexican national cinema agency, organized a similar meeting in March 2012.

As of September 2012, Latin America has 3,800 DCI-compliant digital screens (compared to nearly 2,500 at this time last year). As in past years, Mexico and Brazil have the great majority of these digital screens: 78% (up from 60% in 2009). The chief factor is the Mexican rise (58% of these Latin American screens are in Aztec lands).

On the other hand, digital screens in Latin American countries continue to be extremely concentrated in their capital cities and in their wealthiest regions. (The same is true of the overall exhibition market: On average, less than 10% of Latin American cities have some kind of cinema; countries like Uruguay, Paraguay and Bolivia have only two or three cities with cinema screens; and in Argentina, the eighth-largest country in the world, only 3% of their cities have cinemas.)

Meanwhile, there is a slow growth in the percentage of Latin American digital screens projecting 2D films, especially in Colombia, Peru and Central America and the Caribbean (but it is still not much: an average 7% in all Latin American countries).

As for individual circuits, Cinépolis is beggining to install “4D” screens (sensory stimulus) in Mexico and Brazil, while Cinemark is boosting their XD giant screens in almost all Latin American countries. Other companies, like Chile’s Cinecolor and Brazil’s Casablanca (audiovisual service providers), are developing satellite transmision of DCPs.

Cinemark and Cinépolis are the companies with the strongest effort in installing digital screens throughout Latin America. North American’s Cinemark has the major number of d-screens in Argentina, Brazil and Chile. (National Cinemundo has a similar percentage.) At this time, Cinépolis is leading the digital rollout in Mexico and Central America. On the islands, Caribbean Cinemas has a strong position, as does Cinemark to a lesser degree.

Mexico is the most important Latin American market, and the fifth-greatest market in the world. Mexico’s Cinépolis is the fourth-largest exhibitor in the world, and owns almost half of total cinema screens in Mexico.

Nearly 42% of Mexican screens are already digitized. (Remember that the Latin American digitization percentage average without Mexico is near 25%.) These numbers are being boosted by Cinépolis: The Ramírez family company announced that in 2013, 100% of their screens will be digital. (In September 2012, the percentage of digitized screens was around 65%, with two-thirds of Cinépolis screens in Mexico City already digital. Unusual for Latin America, Cinépolis has 100% digital multiplexes also installed in Brazil, Colombia, Peru and Central America—not to mention their theatres in the United States and India.)

Cinemex is the second main exhibitor in Mexico, and the sixth-largest exhibitor in the world. This Mexican company is also increasing its digital rollout—nearly half their screens are digitized.

Brazil has almost 600 digital screens (compared to nearly 450 one year ago), accounting for 23% of all their cinema screens. As stated above, Brazil is the only country in the region with two important advantages related to the digital rollout, common in other regions but unusual in Latin America: development policies such as financial help and tax exemptions to improve the process, and a consortium formed by national exhibitors to achieve a stronger position in VPF negotiations with majors.

Meanwhile, the “Cinema perto de voçê” (“Cinema near you”) plan continues to support the building of theatres in suburbs of big cities, especially in Brazil’s north and northeast—the poorest areas of the country. All these screens must be DCI-compliant digital. The plan launched in 2010 through a provisional decree that the Brazilian Parliament took into law in March 2012.

In May 2012, Recine was regulated. This is a special regime dedicated to the development of Brazilian exhibition through import-tax exemptions; it is one of the main elements of the “Cinema perto de voçê” plan. In September 2011, through Medida provisoria 545 (provisional decree), the Brazilian government provided these tax exemptions for the import of digital projectors. Recine exemptions bring down digitization costs by 30%

In addition, 17 Brazilian exhibitors formed in late 2011 a consortium called Beyond All, with support of Fundo Setorial and Development National Bank. Some of the exhibitors are Grupo Severiano Ribeiro (the main Brazilian exhibitor), Cinematográfica Araújo, Espaço de Cinema, Moviecom, Cinesystem, Cinemais and GNC, among others.

Beyond All totals 750 screens (30% of Brazilian screens). This consortium will pay near 80% of digitization costs; the VPF that these exhibitors could agree on will be the guarantees.

Cinedigm is overseeing the VPF negotiations with the majors and independent Brazilian distributors on behalf of Beyond All (with nearly US$45 million required). Michael Karagosian’s MKPE Consulting was also recruted by Beyond All.

Other candidates working with Beyond All are Brazil’s Mobz (which signed an agreement with Arts Alliance Media in 2011) and Auwê Digital.

Further north, the Central American and Caribbean market (as a whole) has seen constant growth since 2009. As of September 2012, this subregion had nearly 260 digital screens (28% of its exhibition market), 100 more than last September. Ecuador is also growing, doubling the number of its digital screens in one year (from 35 to 71).

Colombia has 250 d-screens (around 70 more than one year ago), accounting for 39% of its exhibition market. Cine Colombia is stepping up the digitization of their screens: In October 2011, the circuit opened in Bogotá the first 100% digital multiplex in Latin America. Half of Colombia’s digital screens belongs to Cine Colombia.

Argentina is the fifth-largest Latin American market in regard to digital cinemas, with almost 180. Nevertheless, this country is at a standstill. In December 2009, it had the third-highest number of digital screens in Latin America. Today, Colombia has almost 70 digital screens more than Argentina. This situation is the result of many factors: the exchange clampdown that the Argentine government imposed in October 2011; the blocking of imports; and the lack of previsibility to private businesses that are not extremely pro-government. (A similar situation is impacting Venezuela, where the percentage of digital screens is a mere 13%.). The stagnation of the digital rollout is similar to the exhibition market in general: Argentina has had nearly 800 screens for 15 years; it is the only major Latin American market that did not grow during the last decade. As mentioned above, the Argentine government announced development policies to boost the digital rollout in the middle of 2011, but no movement has yet occurred.