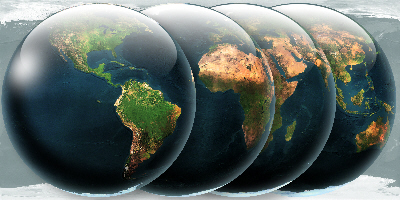 The pace of cinema digitisation in Europe is undoubtedly quite surprising. Ten years after the unveiling of the first equipment, it seemed  to be very slow but, to the surprise of many, accelerated in the latter half of 2009. According to Screen Digest, the number of digital screens worldwide went up by 89% in 2009 and represented about 15% of all modern screens at the end of December.

The role of James Cameron’s film Avatar in this development is undeniable. What is paradoxical about this pleasantly ecological film is that it is in fact itself, the terrible weapon of the logic that it illustrates: the destructive efficiency of technologies once blindly unleashed on traditional environments. At this point in time, many European cinema professionals suddenly feel just as threatened as the Na’vi in Avatar.

Various elements have contributed to this acceleration of the digitisation process: the designation of the DCI format as the international standard, the development and propagation of the Virtual Print Fee (VPF) model by which distributors contribute, through third-party investors, to financing the digitisation of cinemas, and the arrival of 3D, which finally provided exhibitors with a commercial argument by offering the public a new cinema experience.

The history of the cinema teaches us that major innovations become fairly quickly established throughout the world cinema system as soon as the costs are borne by the majors and the big cinema networks. The move to digital is now clearly underway and it is impossible to see anything that could stop it. There is no reason to doubt that the digitisation of distribution is a step in the right direction. Like the development of multiplexes around ten years ago, the DVD and, more recently, Blu-ray and video on demand, digital cinema is an aspect of the modernisation of distribution that helps to keep the industry in good health.

However, this enthusiasm must not blind us to the risks inherent in the transition. These risks are obvious as far as something dear to the hearts of cinema professionals, cinéphiles and cinema policy-makers worthy of the name is concerned: the existence of a network of independent cinemas that ensure the diversity of the films offered and the circulation of minority interest works – European films and films originating from production and distribution channels other than the Hollywood based companies, such as Asian, Indian, South American and African films and independently produced films from North America or Oceania.

The conference entitled “The independent exhibition and the challenges of digitisation” organised in Barcelona (4-6 March 2010) by the Spanish presidency of the European Union served to highlight the concerns of independent exhibitors and the difficulties in introducing national or European policies. The participants agreed that it was preferable for the transition process to be as short as possible since it led to cost duplication and therefore delayed achieving the economies of scale that could be generated for the benefit of the financially weakest.

Risk assessments for the film exhibition sector in the European Union have been produced by the European Investment Bank, according to whose figures 4.4% of screens are already digitised without recourse to the VPF. In most cases, these are screens belonging to certain major circuits that have decided to finance their transition themselves. About 5400 screens out of 30185 (or approx.17%) are allegedly unable to access the VPF system. However, this estimate presupposes that the integrators’ rollout potential has been fully achieved. The integrators have already signed agreements for 4.7% of screens and are in negotiations with distributors for another 15.2%.

In addition to the 17% considered at risk, there are accordingly more than 17 500 cinemas (or 58%) for which the validity of the VPF model still has to be demonstrated. This means there are considerable uncertainties. The financial situation of the third party integrators is not under discussion here but it seems clear that these new players are dependent on access to bank loans, which has been made more difficult by the crisis.In this context, it is now admitted that the VPF model, in its different guises, is not universal and that alternative models need to be developed.

The ideal is clearly for the exhibitors to be able to finance the transition themselves, which would potentially strengthen their programming autonomy. However, there can be no doubt at all that the fact that investment capacities are often limited and the VPF model is not systematically applicable constitutes a failure of the market that justifies public intervention. It is against this background that public bodies at the European, national, regional and local levels are trying to come up with solutions to support the transition.

In September 2009, the Council of Europe Committee of Ministers adopted a recommendation on national film policies, which states in particular that “public policies should urgently and proactively take into account the need to support the emergence of business models for digital film and the development of new platforms and services for European cinema. Such models should respect the diversity and specificity of cinemas in Europe and of their programming, and make sure that distributors keep control of release plans. Models should also ensure that all theatres wishing to engage in such a ‘digitisation process’ can do so in a co-ordinated way, and within a reasonable timeframe.

European participation in the ongoing international digital cinema standards definition process should be strengthened and enforcement of these standards should be ensured.” The Barcelona conference illustrated the diversity of the solutions explored:

• At the European level, the European Commission launched a consultation of professionals in late 2009. The results should lead to the publication by the Commission of a Communication on Opportunities and Challenges for European Cinema in the Digital Era and the incorporation next autumn within the MEDIA 2007 Programme of a new support scheme for the digitisation of cinemas offering substantial European programming. Possible funding is also available, under certain conditions, through the structural funds, which involves the presentation of dossiers by the regions and not the exhibitors. The European Investment Bank is also starting to become involved. In the first instance, it is supporting the market solutions by facilitating access to funding (especially for the integrators). It then envisages becoming involved by supporting the other European and national public initiatives to assist with the transition those cinemas that are unable to access the VPF model.

• At the national level, several support schemes are already in operation. In the United Kingdom, the UK Film Council launched its Digital Screen Network scheme in 2005. In Norway, the Film&Kino network of municipal cinemas launched its scheme in 2006 and negotiates VPF agreements directly with the majors. In Finland, the new measures for supporting the cinema industry, which were approved by the European Commission in 2008, include aid for cinema digitisation. In Sweden, the Swedish Film Institute launched a pilot project to support the digitisation of 28 cinemas in 2009. In the Czech Republic, the State Fund for Support and Development of Cinematography launched a support programme in 2009. In Slovakia, a new fund was created in December 2009. In the Netherlands, in February 2010, the new Eye Film Institute has assigned the implementation of a project to PriceWaterhouse and this should commence in July 2010.

• At the regional level, the Land of Bavaria set up a support system in 2009. In Poland, the region of Ma?opolska (Cracow) has succeeded in obtaining aid from the Community structural funds as part of a project to develop tourism and the cultural industries.

• At the local level, there are a few municipalities that provide support for the digitisation of cinemas located in their area.

In several countries, support schemes have run up against political or legal difficulties. In Germany, negotiations on the implementation of a support scheme worth 40 million euros, proposed in June 2009 by the Federal Film Board (Filmförderungsanstalt – FFA), was rejected in November 2009 by the federation of exhibitors, which does not accept the principle of this support being offered in exchange for the withdrawal of the exhibitors’ complaint to the Federal Constitutional Court concerning their alleged unequal treatment: their contribution to the funding of the FFA is compulsory, whereas that of the television broadcasters is voluntary. In Italy, the tax credit plan proposed by the government in 2009 for the installation of digital projection equipment is being investigated by the European Commission’s DG Competition. At the beginning of April 2010, the Commission had not yet issued its opinion.